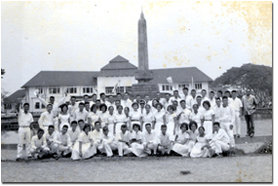 Faculty of Medicine University of Brawijaya was originated from a private medical school named Malang School of Medicine (STKM) which was established on 14 September 1963. However, medical education activities were known 17 years ago in Malang.

Around 1946, most of the teaching staff of the former medical school in Surabaya NIAS (Nederlands Indische Artsen School), STOVIT (School Tot Opleidig Van Indische Tandartsen), advanced students ex IKA Daigaku/SHIKA IGAKUBU (dentistry school at the time of Japanese occupation) from Jakarta and Surabaya formed an association in Malang. During the revolution and migration period this association continued education through the establishment of the Higher Education Institute of Medicine/Dentistry in 1946, by utilizing the facilities of Army Hospital Division VII, now dr. Saiful Anwar General Hospital, now RSAD Soepraoen (Soepraoen Army Hospital) Malang. From here 12 graduates of the first dentists in the Republic of Indonesia who came from domestic university were born. In June 1947, educational activities had to be stopped after Dutch managed to occupy Malang city. After the transfer of sovereignty, medical education was then continued in Jakarta and Surabaya with more complete personnel and facilities. 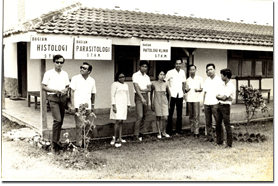 The Birth of PTKM and STKM. The thought to re-establish Malang School of Medicine emerged in 1960-1962. With the support of community leaders, the ad hoc committee of the Indonesian Doctors Association (IDI) Malang Branch initiated the establishment of the Faculty of Medicine Founding Committee. With the support of civilian authorities and military in the city of Malang, the opening was officially conducted: Medical College of Malang (PTKM) on September 14, 1963 by the Minister of Health at the time, Mayjen. dr. Satrio, and it accommodated 105 students of the first batch. Furthermore, in March 18, 1964 PTKM was changed and registered in the Ministry of Higher Education No.76/B.swt/P/64, to become Malang School of Medicine (STKM), with limited education facilities, but rich in spirit, dedication of the founders, teachers, secretariat, students, parents, related agencies and sacrifice of the people who became the component of medical education.

From STKM to FK UB 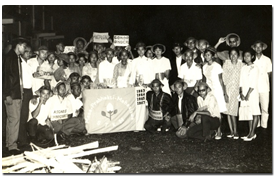 Since its establishment on 14 September 1963 to become Faculty of Medicine University of Brawijaya (FK UB), STKM has changed its leader 5 times, starting from: Kol. dr. Sambiono, dr. G. Djauhar (surgeon), Kol. dr. P. Mamahit, dr . G. Djauhar, and dr. M. Mudarso. STKM has ever used secretariat office of Gaperoma, Kes.Dam Brawijaya. Lectures and practicum activities also use the facilities of General Hospital, Army Hospital, IKIP Malang (now UM), Department of Health, Mental Hospital of Lawang etc. With the monitoring of private medical education by the National Board Consortium Medical Science (NB/CMS), STKM had also followed education evaluation process, namely E1, E2, E3a, E3B, and E4a examination for the candidates of young medical doctor (DM), while physician examination was performed by FK Airlangga University Surabaya. Spirit for progress has also been demonstrated with the cooperation of medical research (endemic goiter) in Malang with a team of doctors from Toho University Japan. Before becoming a public institution, STKM could only produce 31 doctors through NB/CMS exam. 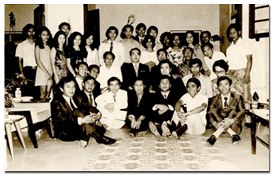 Commencing on January 1, 1976 STKM received the title of Public Faculty of Medicine and became a part of the University of Brawijaya, so the whole process of education and examination of 765 students and 426 young doctors subsequently were performed by 53 full-time lecturers and 36 non permanent lecturers. Before being able to construct today’s UB Medical building complex, UB Medical building once occupied some buildings borrowed from other faculties. The development of medical education at the Faculty of Medicine UB goes further and this can be proven by the accreditation assessment by the National Accreditation Board of Higher Education (letter No.003/BAN-PT/Ak-XI/S1/2008). Today FK UB has had: 16 Study Programs (Prodi) in specialist education, Nursing, Nutrition Science, Dentistry, Pharmacy, and Midwifery. Besides, Postgraduate education that is already running is: Master Program in Biomedical Sciences, Hospital Management (MMRS ), Nursing, Midwifery, and doctoral program in Medical Science.

Converting STKM into a public institution 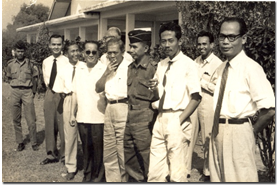 Since its establishment on 14 September until it became a public institution on January 1, 1974, the dean of STKM had changed 5 times respectively; they were dr. Sambiono, dr. G. Djauhar, dr. P. Mamahit, dr. G. Djauhar (second period) and dr. Moedarso. After an uneasy struggle, finally on January 1, 1974 Decision Letter from the Ministry of Education and Culture (Men.Dik.Bud) No. 001/0/1974 about converting STKM into a public institution was issued and the opening was carried out by the Minister himself on February 23, 1974 in conjunction with the XI anniversary of UNIBRAW. Finally, on January 14, 1974, Malang School of Medicine (STKM) officially joined with University of Brawijaya and it was renamed Faculty of Medicine University of Brawijaya (FK UB).

At the time of converting into public institution FK UB physically did not have a campus. Up to 1975 FK UB Secretariat/office was in GAPEROMA building Jl. Bromo 25 Malang. After that FKUB Secretariat was moved to Jl. Guntur 1, occupying what is formerly UB Central Office. The next year after UB Central Office had been completed, FK secretariat moved again occupying drawing room Faculty of Engineering.

Previously lectures and practicum used the facilities of IKIP Malang, then  in 1975 FK began to use the laboratory of the Faculty of Agriculture and Faculty of Engineering, while the anatomy laboratory was still in RST. Soepraoen jl. Sukun. For the classrooms, some laboratories still used rooms lent by dr. Saiful Anwar Hospital.

The exams for level increase of FKUB students were still performed by NB/CMS (National Board Consortium Medical Sciences), namely E1, E2, E3a, E3B, then to be able to follow co-assistant (DM) students must pass E4a exam.

With that authority, the students at the time of conversion into public institution (765 students with 426 young doctors) who had passed NB/CMS-E3B exam ??could be tested by FKUB itself and could be completed within 2.5 years. Recalling that at the time of conversion STKM only generated 1 doctor and 30 doctors from NB/CMS exam, it means that since 1976 all medical doctors are graduates of FK UB.

Furthermore, in accordance with the planning of University of Brawijaya, the building for FK was to be built in the Southeast of the campus in Sumbersari area.

Accreditation of Faculty of Medicine

In the further development, in accordance with the needs of the community, FKUB opened Departments/Study Program, namely:

In accordance with the Rector policy which requires that study program of Master and Doctoral degree must be under the Faculty, so there are several Postgraduate Programs under FKUB, among others:

Similarly, in the field of profession education for specialist, FKUB has had 16 specialist education programs.